Hey there pals. Yup that’s right it’s me, appearing before you for the first time, NostaTravis. Well, you know, I heard that baseball season was coming up soon, what with it bein’ April and all, and I thought maybe you all would like to know what was going to happen this year, since the baseball season is pretty long and the games are considered “boring” by some of you less dignified mortals, and you might just not have the patience to stick around and find out who the winner will be come October. So, consider this your **SPOILER ALERT** because if learning the winners of all the games before they happen will upset you, you better just go ahead and check out now.

Some things to note before we get started:

A lot of folks are down on the Orioles this year, which doesn’t make a dang lick of sense; they didn’t do much in the off-season, but they won this division by 12 games last year without Manny Machado and Matt Wieters, they didn’t need to do much … The Rays will have one of the best starting rotations in the league once Alex Cobb and Matt Moore are healthy, but their lineup is abysmal … A-Rod will play this year, which is pretty funny.

A couple of years ago, this division was a laughing stock outside of Detroit. Now it’s probably the best division in baseball: I could easily see any one of the four top teams taking it, and the Twins are only a year or two away from contention … The White Sox made a big splash in the free agent market, but a lot of times you don’t see a team click into contention after moves like that until year two … Sure the Tigers are getting old, but they’re not the Yankees yet, and David Price and Miguel Cabrera are still the best pitcher and best hitter in this division.

Mike Trout is the best player in baseball and it isn’t close. The Angels have a bunch of other nice pieces as well … Oakland was very busy this off-season and made a couple of moves many considered questionable, but they haven’t lost too much … Yu Darvish will miss the season after having Tommy John surgery, which is an absolute tragedy … The Astros still aren’t close. Was the possibility of contending in the nebulous “next year” worth the half decade they’ve put their fans through? 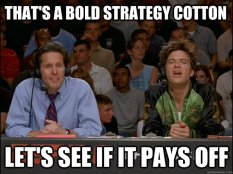 A lot of people have dismissed the Nationals’ division championship as a foregone conclusion, which I think is as much an indictment of the rest of the division as it is a crowning for Washington. Everyone else is terrible … That being said, holy cow is Washington’s starting rotation good. Gio Gonzalez is their FIFTH starter — he is better than every pitcher currently employed by the Milwaukee Brewers … The Phillies are sitting at the intersection of really old and really bad. It’s an interesting approach.

“Travis you can’t put the Brewers in first place you are being ridiculous” Oh yeah well guess what idiot I just did, shows what you know … The Brewers are a better team this year than the team that spent 150 days in first place last year. It’s not a stretch to think Jimmy Nelson can produce at the same level Gallardo did last season, Braun is healthy again, they employ an actual first baseman for the first time in three years, and the bullpen is deeeeep … “Travis you can’t put the Cardinals in third place you are being ridiculous” Yes I can fuck the Cardinals … The Cubs are going to be good. Really, really good. But I think they’re still a year away.

I mean, the Dodgers can afford to outbid everyone for anyone, and they just went on got one of the best penny-pinchers in the game in Andrew Friedman. I’m not sure how well that’s going to play out: he just shelled out 4/$48 for Brandon McCarthy … The Padres were involved in basically every off-season deal all winter, and they’ve obviously improved a league-worst offense immensely. I’m a big fan of their 100% new and improved outfield … The Diamondbacks have about nine major league players on their team, which is pretty good, because there aren’t any on the baseball team that I own. But since most of the other teams in the league have 25, I don’t think they’re gonna have a really nice time.

The smirk of a man who knows he’s the best in the world.

MVP
NL: Giancarlo Stanton, Miami
AL: MIke Trout, Los Angeles
Anyone who picks someone other than Trout for MVP is grasping for headlines. Get real.
Cy Young
NL: Clayton Kershaw, Los Angeles
AL: Felix Hernandez, Seattle
Little bit of chalk here, but these are the two best pitchers in the game, health permitting.
Rookie of the Year
NL: Kris Bryant, Chicago
AL: Rusney Castillo, Boston
Boy, I SURE AM EXCITED for the Cubs future.

Well, thanks for taking a look, friend. Feel free to bookmark this post and tell me what an idiot I am during this year’s White Sox-Cubs World Series.